WWW (World Wide Web) era has ginew dimension to common man’s life. Eventially it was a matter of official use but now these days it becomes household name aroud the globe. Searching data is the most used term in web where search engines play the key role. There are thousands of search engines are running online but I have short listed Top 10 Search Engines and their using numbers. 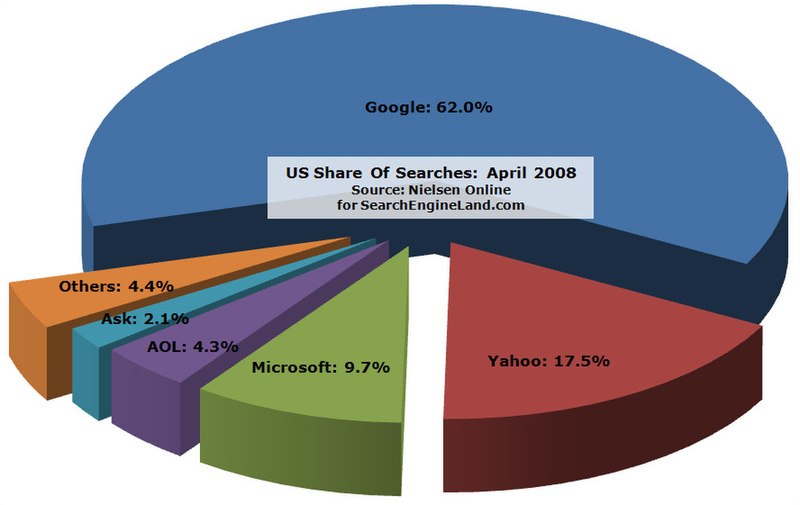 On this page weâ€™ve listed the top 10 general-purpose search engines used by people all over the world, to search the Internet. If youâ€™re looking for a specific type of search engine, such as a meta or blog search engine; or one specializing in a particular industry â€“ like a job search engine; you can browse the other types of popular search engines using the right sidebar navigation.

We have tried to compare top 10 search engines around the globe for common users and their questions/searches.

1. Google.com â€“ Launched in 1998 by Larry Page and Sergey Brin, Google is by far the most popular search engine globally. Originally named BackRub, Googleâ€™s network of sites roughly get 65% of all the United States queries and is considered by most people to be the worldâ€™s best. As of Oct. 3 2010, Alexa reports Google.com as the most visited website worldwide. Submit your website to Google.

Google powers: AOL (including CompuServe & Netscape), MySpace, Comcast Search and many other websites.

2. Yahoo.com â€“ Started in 1994 by David Filo and Jerry Yang, Yahoo! was originally a directory of websites that later became its own crawler-based engine in 2002. As of late 2009, Yahoo! was the second biggest search engine on the web. However, in late August of 2010, Yahoo!â€™s results started using Bingâ€™s index. As of Feb. 1 2012, Alexa reports Yahoo.com as the 4th most visited website globally. Submit your website to Yahoo!.

4. Ask.com â€“ Formally known as Ask Jeeves, Ask was founded in 1996 with the idea of allowing users to get answers to questions posed in everyday, natural language, as well as traditional keyword searching. Today Ask.com includes support for math, dictionary, and conversion questions. In November of 2010 Ask.com announced it would no longer be crawling, indexing and ranking its own pages, and will instead be outsourcing that to Google or Bing. Ask will continue to focus heavily on Q&A. There is no need to submit your site to Ask.

5. DuckDuckGo.com â€“ Founded in September of 2008 by Gabriel Weinberg, DuckDuckGo (DDG) prides itself on respecting user privacy. Duck Duck Go compiles its result by crawling many sources, including DuckDuckBot (their web crawler), crowd-sourced sites, Yahoo! â€œBOSSâ€, embed.ly, WolframAlpha, EntireWeb, Blekko and Bing. There is no need to submit your website to Duck Duck Go.

6. Yandex.com â€“ Beta-Launched in 2010, this search engine offers people around the globe to the opportunity to search pages in English, French, German and other European languages. Itâ€™s a spin-off of Russiaâ€™s predominant search engine, Yandex.ru, which has been around since 1997. Features include free email, an API and search suggestions. Click here to add your site to Yandex.

7. SrubTheWeb.com â€“ Since 1996, Scrub The Web claims to rank all indexed pages individually, with all pages getting an equal chance of ranking high in their search results. Submit your website to Scrub The Web.

8. Entireweb.com â€“ Originally launched in 2000, Entireweb launched their International search engine Entireweb 3.0 on April 7th, 2010 to compete with the current market leaders. It provides a number of advertising programs to help you get exposure, but you can also certainly Submit your website to Entireweb for free.

9. blekko.com â€“ Launched on November 1, 2010, blekko is quickly becoming known as the â€œslashtagâ€ engine. blekkoâ€™s slashtags allow you to quickly and easily create custom searches. blekko also offers some of the best free optimzation and anlysis tools for webmasters. There is currently no website submit form for blekko. Blekko will crawl and index your website after finding it through sites that are linked to your. There is no need to submit your site to blekko.

Entireweb powers: Exactseek, Slider and a the results for a few other web sites.

10. Gigablast.com â€“ Launched in 2000, Gigablast aims to index up to 200 billion pages with the least amount of hardware possible. Itâ€™s one of the leading clean-energy websites online with a whopping 90% of its equipment receiving power from wind energy. Submit your website to Gigiablast.

Keep in mind this top ten list of general search engines is based on Alexa Traffic Rank only; not necessarily which ones are best from a userâ€™s perspective. If youâ€™d like us to review another search engine missing from our one of lists donâ€™t hesitate to send us the web site information via our contact form.